#15 - Can I get paid well for freelance writing?

**Guys - if I sound out of breath and nasal-y, it's because I recorded this while I had COVID and was having some issue with breath control. Hope it doesn't sound too bad! 💓

Google has some crazy things to say about copywriting some people say that you can become a millionaire. And then other writers online say it's oversaturated don't even try.

So my goal in this episode is to answer questions I myself had when deciding to launch a freelance copywriting business.

And for some of you this information might be brand new, but for those of you who are already making some money as a freelancer, while this is just going to reinforce that, you need to push yourself and feel confident that you can make even more money.

So I think one of the questions that most copywriters have is can they actually get paid well for freelance writing? So I'm going to answer that question today.

Now, for those of you who don't know me, I'm Christine the creator of paidcopywriter.com a place where I teach writers how to transition out of their nine to five and build a full time freelance writing career.

So getting back to the question, freelancing can be lucrative for sure, but it does depend on a few different factors.

So your niche your writing niche, your specialty, right? Well, your ability to command high rates in your copywriting business will depend on your niche. So I have a whole post on paidcopywriter.com called the ultimate guide to choosing your niche but some examples of niches are finance technology, digital marketing, and software technology. Software, otherwise known as software as a service, abbreviated as SAS, is my niche.

It's a little bit confusing, because some people will say, Well, my niche is blog writing. My niche is email writing. For most people, in general and myself, when we talk about niche, we're referring to the industry.

What is the topic or your area of expertise that you specialize in?

Now obviously, choosing a higher paying a niche such as finance or software is only going to increase the odds that you're able to make a lucrative business. So you really want to just be sure that you're choosing your niche, not just something that seems cool.

Not something that seems interesting, because just because you're interested in it does not necessarily mean there's a huge demand for it or that you'll instantly start making money doing it.

And you know, for me, the way I see it is that start with something that is in demand that you have experience in and then later on when you're an established writer, you can make that pivot to the niche that you're truly passionate about, but you really want to just hone down, you know, hone in on this one niche that you specialize in. Doesn't have to be super interesting, but you do have to take somewhat of an interest in it right.

Now. Let's talk about the client piece of this.

So obviously your income is going to depend on how many clients you have and how much you are charging those clients. So if you know how to reach out to clients properly and market yourself online, it's 100% possible to gain the high paying clients that you're going after.

Now, here's the third factor you improving as a writer and your ability to consistently raise your rates right that's going to impact how much you can make in this career field. If your rates constantly stay the same, you are going to you know remain stagnant.

like too many copywriters get hired as a writer and say, Well, I'm the person who creates words. I put them on the page and that's my job, but you are part of the marketing department writing is a marketing function.

So to hear all about how to make yourself more competitive in this way as a freelancer and start reframing how you talk about yourself. [Definitely listen to episode 14 Because I have my mentor Scott on and he talks about how to level up your freelance mindset so you can start making more money. And I'll include the link to that in the show notes.]

Here's another thing though, about freelance income, little sidebar, a little disclaimer.

Money isn't the only thing to consider when it comes to this profession and just in general, right because a job that pays six figures could either a wind up being a nightmare if it's just not a fit for your lifestyle, but in general, we can't look at salary alone. We have to look at all these different factors. What is the commute? What are the taxes? What are the expenses that are going to cut into that salary? So in general, I can just say me being really stressed in my last career even though I was making a six figure salary. Well, I wound up spending a ton of money on my health trying to find solution because I was so burnt out and so stressed out and at least here in the US and kind of like West in general. They don't really, Western medicine doesn't really address like the full body. The whole mind body spirit connection. So burnout and stress is really difficult to treat. So I had to go to like functional medicine doctors and Chinese medicine doctors and take all these supplements because I didn't want to go on any drugs and that cut drastically into the amount of money that I was able to take home right so one of the biggest things luckily that I noticed as a freelancer was that I had this huge spike in my mental health and huge increase or improvement in my physical health like I I lost a ton of weight since working for myself as a freelancer working from home. I'm I'm the lightest that I have been since high school on like down to my high school weight and I've struggled with my weight. You know, pretty much since I was a kid trying to control my weight so once I was able to live a more relaxed lifestyle and make all my you know, meals at home that kind of balanced out and that was kind of a lifelong battle. So it's pretty big deal.

And I thought this was only me, but then I saw this stat so according to Forbes 64% of all freelancers have stated that their health has improved. Once they've gone independent, which makes freelancing a healthy or healthier alternative to traditional work. I thought that was really cool that kind of validated that I'm not alone.

So let's talk about copywriting being oversaturated

But personally my goal is to show people that it's actually very doable to become a copywriter. And I've actually coined this term like I always refer to this as false barriers because there's so many people that make copywriting seem very exclusive, or like almost impossible.

And I think that just originates because there's writers out there that have like this scarcity mindset and they don't, you know, they don't want more competition. Obviously that makes sense and they can kind of benefit from creating false barriers that stop other people from even trying to get into this field.

Honestly, I believe the total opposite of market saturation, right. I believe that if there's a ton of people pursuing copywriting, that means there's a really viable market for it.

There are so many millions of businesses out there and people who need to get the word out about their brand who want to get more customers. So as long as sales and marketing are needed, copywriters will always be needed.

And I actually got this stat from Upwork. Right so the freelance industry makes up almost 5% of the total US GDP, and has higher revenue than other industries such as construction or transportation. And the average skilled service rate is $20 per hour, meaning that skilled freelancers earn more per hour than 70% of the whole US workforce.

Now, here's the big question. So you have the confidence now that you can make money as a freelancer but how do you become a freelance copywriter with no experience?

And my answer to that is you don't necessarily need writing experience to start getting into copywriting and charging higher rates like from the beginning.

That's just the truth. The problem is is that most copywriters just don't know how to pitch and market themselves correctly.

So like personally for me, I got my first freelance copywriting client in less than 30 days like deciding I was going to go for this doing some research 30 days later, I got someone to finally say yes to me, and I was making a full time income anywhere between like four and six months from starting.

And I never used a freelance bidding site like I never used Upwork or Fiverr, or those are really like the big really popular ones, but I never used any of those platforms. I just use my LinkedIn profile which was free.
And obviously I did write my samples right like I built my portfolio and I actually did agree to I'm gonna say two pieces of unpaid work, maybe it was one and

I have all the information about that on pain copywriter.com If you go to the blog and look at my post on building your portfolio, I'll explain that in more detail.

And if writing these cold messages to random people is a little bit intimidating or makes you feel scared, you're definitely not alone. So if you want to learn how freelance writers use LinkedIn to get high paying clients you should definitely download my free guide at paidcopywriter.com/linkedinguide. I go into more detail there and whether your profile just needs to be revamped for freelancing or you're starting from complete scratch that guide is definitely going to help you and just so you know whether you know no matter what boat you're in, whether you are brand new to LinkedIn and copywriting and freelancing. 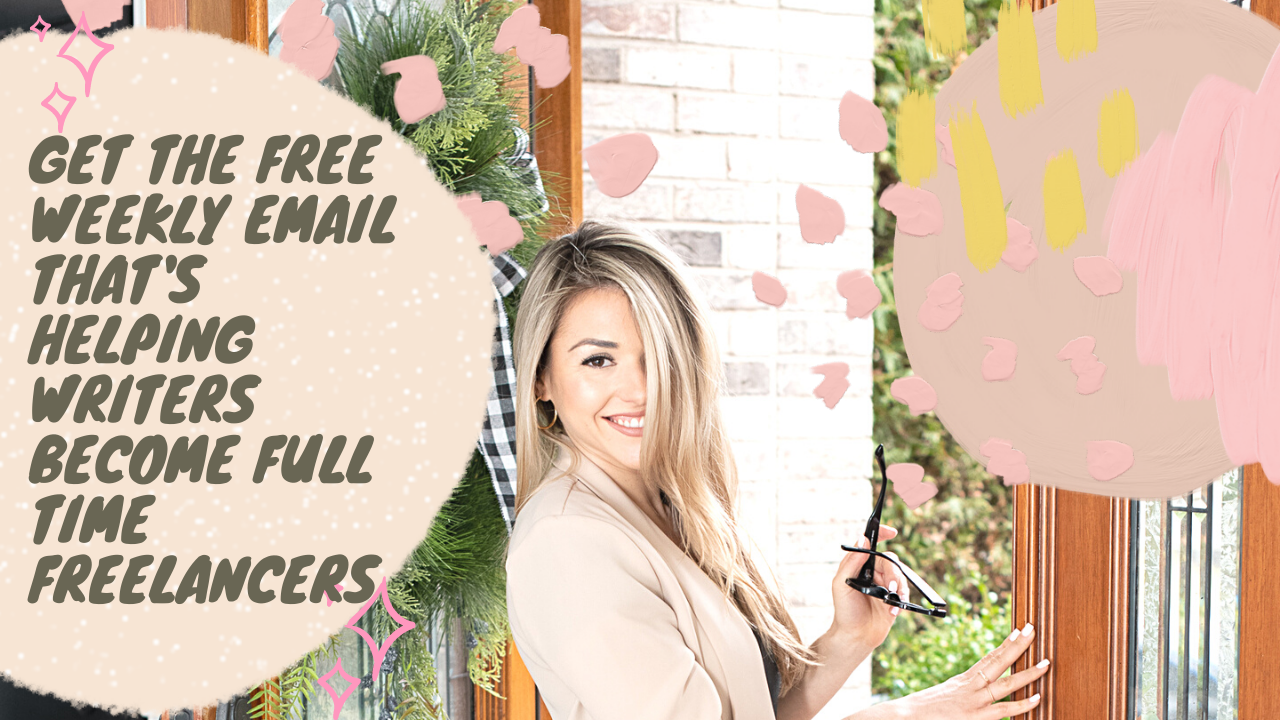 My subscribers often respond to my emails telling me the ACTIONS they've taken toward their journey to self-employment.

Will you be one of them?